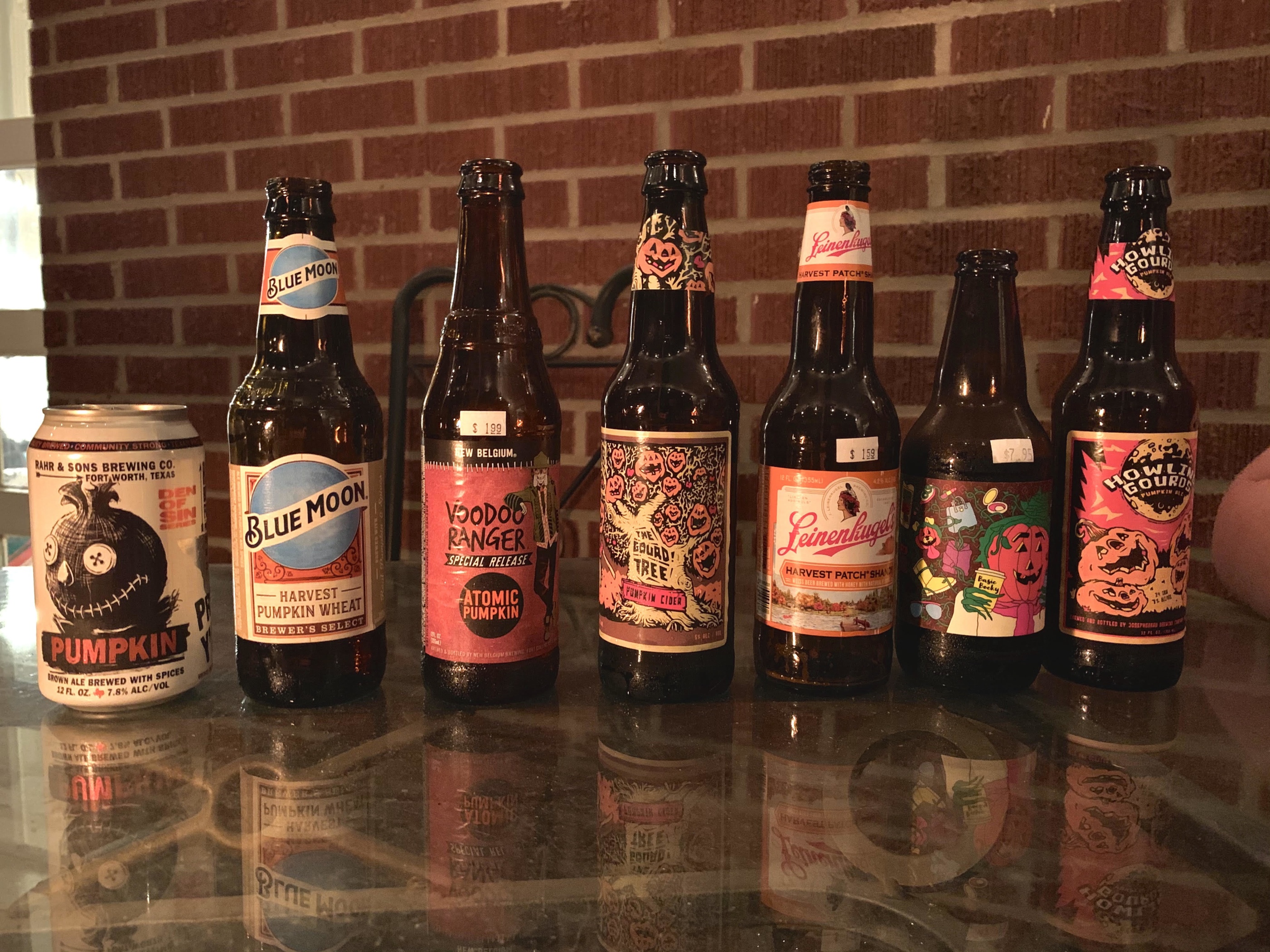 Hey friends! The Chamberlain family has taken over Kacie Eats for the month of October. I'm Maria, the wife, mom, and planner of events. =) This is 100% us, quirky, fun and TOTALLY random.

Pizza- who doesn't love it?

We thought long and hard about trying all the new, hip pizza places but ended up at the most random places. Also have you ever realized most restaurants have pizza on them? It's crazy how much we all love pizza.

1) Birra Birra Craft Pizzeria
We love Birra Birra and have been many times. Until this visit, I had never eaten their pizza. I know, it has PIZZA in the name and I always ordered something else. It's always been delicious. But back to the pizza, we ordered the Buffalo Chicken Pizza and a half cheese/half pepperoni (for the kids).

The Buffalo Chicken is a new pizza on the menu and it was great. Different but great. The base sauce is buffalo sauce with mozzarella and buffalo chicken. (think wings on a pizza) The crust is wonderful, not too thick, but not too thin, hand-tossed and just perfect. Steve's Farmhouse Salad is one of my favorites in OKC metro, so for sure start with that.

They have delicious ice cream as well and if you're looking for a brunch place, try it out! Espresso Nutella Crepes. OH. MY. LANDS.

The kid's pizza was, in the words of an 8-year-old, "perfect." Just enough cheese and the perfect amount of pepperonis.

2) BJ's Restaurant and Brewhouse
BJ's Restaurant and Brewhouse is our next stop. The menu is HUGE, I always have the toughest time deciding what I want. We chose the Tavern Cut Pizza all meat. Tavern Cut is thin crust pizza at BJ's. Its shape is a little different so it's cut into squares. Our kids think that is the coolest thing ever and really would settle for Domino's anytime just because of how the pizza is cut. It was good. Not my favorite pizza but everyone enjoyed it.

3) Hideaway Pizza
A staple pizza place in Oklahoma. It's always good. The fried mushroom, fried pickles, sandwiches and of course the pizza, it's always delicious.

We ordered The Boz and Big Country. I love Hideaway. We always order thin crust, truly not a fan of thick or deep dish, but just my opinion.
The Boz has bacon, sausage, pepperoni, jalapeno, and red bell peppers. BACON ON PIZZA! It's my favorite. Really I could add bacon to any main dish and be a happy camper but on pizza. Oh so good and crispy on the top. Whew, it's delicious.

Big Country has Canadian bacon, hamburger, pepperoni, and polish sausage. My husband and son love all the meat on this one. My son has been known to ask for "MEAT" for dinner since he could talk, so this pizza is right up his alley. Again, thin-crust and delicious.

By now you can tell I will never be a food blogger just by the pictures of half-eaten pizza, we had the hardest time remembering to take a picture of our food but had the best time trying new things!

I'm now hungry and will probably eat at one of these places today. Thanks for letting us enjoy pizza and getting to have some special meals together!

Hi, I’m Laura Hawk, a motion designer, DIY enthusiast, very part-time florist, and OKC native, as well as Kacie Kinney’s high-school BFF. She is one of my oldest friends and while we don’t see each other as often as we’d like, we always pick up right where we left off. Kacie helped my husband Chris and me while buying our first house and we’ve delighted in seeing the Kinney tribe grow over the past few years.

Chris and I wanted to kick off October with a bang and while it may be a bit unfashionable in a #basic kind of way to get obsessive over the annual return of all things pumpkin, I don’t care, I just like pumpkin. We decided to get our hands on a bunch of pumpkin-flavored beers, make our own little flights, and rank them to see which was best.

We got most of our pumpkin beer from Freeman’s Liquor Mart who conveniently had all their options right by the door on their seasonal shelf! But a pumpkin adventure wouldn’t be complete without a trip to Trader Joes. Joe truly doesn’t care about coming off as #basic because while we were there we also got some Autumnal Flavored Popcorn, Pumpkin Pancake & Waffle Mix, Pumpkin & Squash pasta sauce, and a pumpkin-flavored “Kringle” imported from a Wisconsin bakery.

***Bonus review - The popcorn, pancakes, and pasta were acceptable, and the kringle was gross. We frolicked the isles of Trader Joes, while also laboring over how many pumpkin-themed items would make us look crazy. Or perhaps if a cart is piled high to overflowing with pumpkin groceries, people will assume you’re doing something important with it all. We didn’t forget what we came for, and also picked up 2 variations of pumpkin libations.

Here’s a photo of the beers we ended up with, in no particular order:

Sitting on the side porch with tiki torches lit, we began with the Rahr & Sons Brewing Co’s Pumpkin. It had a bitter, chemical after-taste and turned out to be our least favorite.

Next, we tried the Leinenkugel Harvest Patch Shandy. Upon more reflection, I think this was my favorite when it comes to most drinkable and I would buy it again. It had just enough pumpkin without getting over-the-top about it. Chris was slightly less partial to it because it had a little too much of that “shandy lemonade” thing, which felt like it was standing too in-between summer and fall.

After that, came Blue Moon’s Harvest Pumpkin Wheat. We thought this would be a good middle of the road control beer when we purchased it, but after several tastes and discussion, we’ve decided we hate Blue Moon as a whole and everything it stands for. It’s truly an affront to Belgian beers, the color blue, and moons across the galaxy. However, it was only second to last in placement, which tells you how badly Rahr & Son’s did their Pumpkin.

Next, we sampled New Belgium’s Voodoo Ranger Atomic Pumpkin. This one was SPICY in a good way. It wasn’t just the hint of jalapeno, but also all the pumpkin pie spices that made this one truly unique.

After that, we tried Trader Joe’s The Gourd Tree Pumpkin Cider. This one takes the award for most divisive. I loved that it was sweet and had an intense clove-y finish. And Chris thought it tasted like sweetened nutmeg sweat.

We stayed in the Trader Joe’s vein with the Howling Gourds Pumpkin Ale. Imagine a New Belgium Fat Tire with essence of pumpkin. Chris thought this was the most drinkable. To me, this one was a lot like the Harvest Pumpkin Shandy but a little less sweet.

We finished with the most expensive beer. It’s $8 for 12oz but with an 11% ABV, so there’s some bang for your buck when drinking Prairie's Basic Becky Imperial Pumpkin Stout. This one gets points for being self-aware and also it was the only one that if this had been a blind test, there’d be no mistaking it for one of Prairie’s Brews. It also was super intense, so packed with flavor it took a few sips to really get all the individual notes of allspice, caraway, cinnamon, cloves, coriander, nutmeg and the belle of the ball, pumpkin. This one is super dark and even seemed thicker than usual for Prairie. We enjoyed it but neither of us could tolerate much, especially here, at the end of our taste-test.Marriage is give and take, so we debated and shuffled until we were both satisfied with the following ranking:

I think the top 3 beers could be shuffled in any order depending on your personal preference of ale vs shandy vs stout. It’s hard to name a true winner when you’re not comparing apples to apples (or rather pumpkins to pumpkins). Looking over this list again, it’s also worth noting that Voodoo Ranger really got a raw deal. I just don't love an IPA so it’s my fault he’s down so low. Poor guy. Thanks for reading, and I’d love to hear in the comments if you’ve tried any noteworthy pumpkin beers that should have been part of our test.